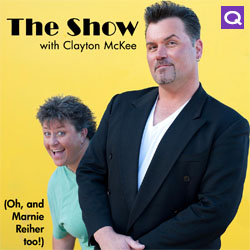 Another week of good times continue with the cast of the most off-the-wall show on the network!  Clayton’s attempt at tweaking the show to make it better and more organized is fodder for the others as they make fun of what they call his “pie-charts”.  They are simply charts that show each hour and where they need to be during any specific time…he’s hopeful.  During this tightened format, it appears to all be going smooth until Marnie pulls a quart jar of cherry moonshine out of a bag! (Where the hell does she get this stuff?)  The gang passes it around while continuing with headlines, sports and a new segment in the 2nd hour called “4-4-40”, 4 people, 4 lists and 40 minutes to talk about it all.  Also, be on the lookout for an additional (NOT BROADCAST) segment of the show called “Hour 3” where they spend one additional hour in the studio where the conversation keeps going! Good times!
Join us LIVE Tuesdays  7-9pm MST.  Listen online, chat and call-in!  (888) 791-9294.  Email us at theshow@qtalkaz.com

This site uses Akismet to reduce spam. Learn how your comment data is processed.